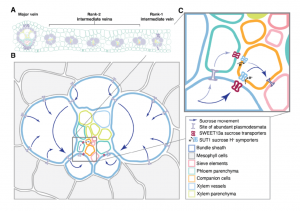 Every student knows that in a C4 plant like maize, photosynthetic carbohydrates are synthesized in the bundle sheath cells that surround the vein. These carbohydrates are then transported into the phloem for delivery to other tissues. Previous studies have identified SWEET (Sugars Will Eventually be Exported Transported) membrane proteins as mediating sucrose efflux from bundle sheath cells. Here, Bezrutczyk et al. used a single-cell sequencing strategy (followed up with in situ mRNA hybridization) to query the cell-type specific expression of these genes in maize. They found in that smaller veins, the main site of phloem loading in maize, three SWEET13 paralogues (previously shown to be necessary for phloem loading) are specifically expressed in the abaxial (lower) bundle sheath cells, as well as nearby phloem parenchyma cells.  These findings suggest a distinct pattern of phloem loading in maize as compared to barley and Arabidopsis and may be a specific adaptation in maize and possibly other C4 plants. (Summary by Mary Williams @PlantTeaching) Plant Cell 10.1093/plcell/koaa055 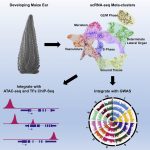 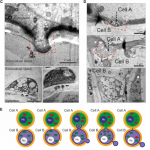