High temperatures caused by climate change are predicted to decrease cereal productivity in many parts of the world. Yield losses due to rising 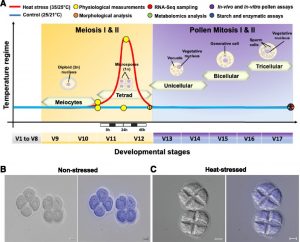 temperatures have already been reported for major cereal crops including maize (Zea mays), wheat (Triticum sp.), and rice (Oryza sativa). These cereals together are the main sources of caloric intake of the people in most countries. Therefore, it is necessary to elucidate the most critical stages of plant development and reproduction, to understand the underlying molecular stress responses, and to use the knowledge generated with the long-term goal to develop heat stress-tolerant crops.  Two contributions in this issue shed light on the responses of cereal plants to heat stress. In the first case, Begcy et al. (10.1104/pp.19.00707) shed new light on the effects of heat stress on male gametophyte (pollen) development, often the most heat-sensitive step in the plant life cycle, in maize (Zea mays). The authors demonstrate that a short moderate heat stress during the highly susceptible tetrad stage strongly affects basic metabolic pathways and thus generates germination-defective pollen, ultimately leading to severe yield losses in maize.  Transient heat stress resulted in reduced starch content, decreased enzymatic activity, and reduced pollen germination, resulting in sterility. A transcriptomic comparison pointed toward misregulation of starch, lipid, and energy biosynthesis-related genes.

In a second study, He et al. (10.1104/pp.19.00403) subjected maize plants to 2-h (short-term) or 48-h (long-term) heat stress, and different vegetative- and reproductive-stage tissues were subsequently collected for mRNA sequencing (mRNAseq) and sRNA-seq. By comparing the mRNA transcriptome profiles, they identified differentially expressed genes in specific tissues. In particular, genes responsible for photosynthesis in chloroplasts were repressed after short-term heat stress. From the sRNA transcriptome analysis, they discovered that a plastid-derived 19-nt sRNA, presumably the footprint of a pentatricopeptide repeat (PPR) protein, was significantly induced after heat stress. In contrast, the abundance of a population of 24-nt siRNAs from transposable elements (TEs) in roots and tassels was conspicuously reduced after heat stress. Moreover, nearby genes also showed a similar decreased trend, indicating that the expression of siRNAs and their nearby genes may be coregulated. Finally, the authors identified specific miRNAs, as well as miRNA* [The passenger strand (miRNA*) of the miRNA/miRNA* duplex is usually degraded after the formation of mature miRNA-Argonaute1 complexes, but studies in both animals and plants have shown that many miRNA* species can accumulate considerably, and their function may be as important as, or sometimes even more crucial than, the function of the corresponding guide miRNA.]  This study provides a comprehensive expression profiling of heat-responsive mRNAs and sRNAs and elucidates the molecular mechanisms that regulate heat stress in maize at both the transcriptional and post-transcriptional levels. 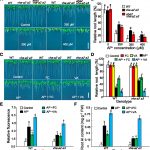 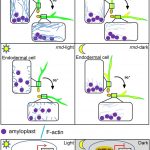