Leaves are specialized for the photosynthetic assimilation of atmospheric carbon, but they also are responsible for the transpiration of water into the atmosphere, as the final output of the plant’s hydraulic system. They therefore regulate a significant part of the carbon and water flow within the plant. Although water and carbon fluxes are tightly coupled, their dynamics and interactions on a daily scale are still poorly understood (Steppe et al., 2015). The conversion of light energy into biochemical energy through the synthesis of carbohydrate molecules has important consequences for leaf water relations. Approximately 200–300 water molecules are usually transpired for each molecule of CO2 that is assimilated into organic compounds.

As daytime transpiration is higher than root water uptake, solute concentration and related osmotic potential (Π) increase from dawn to midday. An accumulation of solute helps the cell retain water and keep the cells turgid. However, over-accumulation of solutes is detrimental for biomolecules and Π should be limited. Plants have three options for maintaining a concentration of biologically compatible solutes: consumption, storage or export to other plant organs. The export of carbohydrates through the phloem is explained by the mass flow hypothesis (Munch, 1930). Carbohydrates, mainly sucrose, synthesized in the source organs diffuse into sieve tube elements and attract water molecules from the adjacent xylem conducting element along an osmotic gradient. The hydrostatic pressure thus created pushes phloem sap towards sink organs where carbohydrates supply other biological processes (e.g. respiration, growth, storage).

Two different strategies have been observed in plant species to transfer sucrose from photosynthetically-active mesophyll cells to the phloem sieve tube elements: active and passive loading (Comtet et al., 2017). In active loaders, sucrose is converted into Raffinose Family Oligosaccharides, which are trapped in the phloem. This transfer increases the total phloem carbohydrate concentration to a higher level than in the mesophyll, but at the cost of expending energy for carbohydrate conversion and transfer. In passive loaders, carbohydrates diffuses in the symplasm following the concentration gradient via plasmodesmata (Rennie & Turgeon, 2010). Accordingly, one question arises: is solute export feasible when water becomes limiting at intervals during the day and over the growing season?

In this issue, Gersony et al. (2020) examined the diurnal changes of water, solutes and reserve contents along the course of the day and at different times during the growing season (June–September) in the leaves of five mature (> 20 m tall) red oak (Quercus rubra) trees, a species considered as a passive loader. They hypothesized that solute concentration would increase during the day by the combined effect of increased solutes generated by photosynthesis and dehydration by transpiration. The subsequent increase in Π would help to maintain mesophyll turgor during the day, thus avoiding cell plasmolysis and stomatal closure. However, to prevent Π from increasing too much, small carbohydrates would be transformed into starch by reversible polymerization. During the night, rehydration of the aboveground tissues would allow the starch to hydrolyze into small carbohydrates that would be exported by the phloem.

During the study period, leaf growth was complete and the assimilated carbon could not be integrated into structural components (e.g. cellulose, hemicellulose), which are osmotically neutral. To assess carbon export, they used a mass balance approach, considering that photosynthate could be stored as starch, consumed by respiration, or exported by the phloem. Two components of carbon balance were measured: non-structural carbohydrates (soluble carbohydrates and starch) and net assimilation (by gas exchange analysis integrating carbon gain by photosynthesis and loss by respiration). The difference between net assimilation and change in non-structural carbohydrate was considered to correspond to the export of carbon by phloem. In parallel, they measured the water component via water potential (Ψ) and osmolality to account for the interaction between leaf carbon dynamics and diurnal and seasonal water stress.

Clear daily dynamics with a midday peak were observed in net assimilation, starch and sucrose contents. In addition, the calculated carbon export was proportional to net assimilation and inversely proportional to Ψ. These results show that water limitation did not affect carbon export by leaves, which contradicts the initial hypothesis. However, an accumulation of starch and sucrose occurred over the course of the day because the carbon export was lower than the net assimilation. During periods of seasonal water stress (August–September), the Ψ of the xylem decreased by more than 1.8 MPa between night and day (from -0.1 to -1.9 MPa), whereas solute potential decreased by ca. 0.7 MPa (from -2.0 to -2.7 MPa). The Π of the phloem thus remained more negative than the Ψ of the xylem, allowing water to be drawn into the phloem by osmosis. The authors therefore concluded that the water deficit did not prevent the export of leaf carbon during periods of daily and seasonal water stress.

Moreover, carbon export was maximum when leaf turgor was minimum. Since starch storage at the leaf level is not limiting, modulation of sink demand in other organs in response to temperature has been proposed to explain such a trend. The interaction between carbon and water status was explored by calculating the relative contributions of passive dehydration and active solute accumulation to the change in Π. Interestingly, the variation in diurnal pressure during the water stress period was mainly distributed over mono- or disaccharides (0.28 MPa; 40%) and other solutes (0.25 MPa; 35%) rather than over dehydration per se (0.1 MPa; 25%). Although carbon export was maximum when leaf turgor was minimum, this result highlights the major role of organic compounds in maintaining water homeostasis in leaves. The accumulation in sucrose has a profound effect on osmotic adjustment, maintaining water in the cells and thus extending their period of functioning, minimizing non-stomatal limitation (Salmon et al., 2020).

Next, the authors asked whether the concentration of sucrose in the phloem was sufficient to drive bulk flow from source to sink under the passive loading hypothesis. Based on several assumptions and a transport model for passive loading in red oak leaves (Rockwell et al. 2018), the maximum pressure difference between the source and the sink could reach 0.2 MPa. Taking into account the gravimetric pressure induced by the height of the tree (20 m corresponding to 0.2 MPa), the maximum pressure difference could reach up to 0.4 MPa. As the pressure difference could remain positive, passive phloem loading cannot be excluded as a mechanism driving phloem transport from source to sink, despite a high diurnal water deficit and a low difference in pressure.

Finally, these results shed light on the dynamics of carbon and phloem during the day. A high accumulation of carbohydrates during the day contributed up to 0.6 MPa to leaf turgor for a total of 0.7 MPa. Time of day is a critical variable when sampling for carbon and hydraulic components such as Ψ at the turgor loss point determined on leaves sampled before dawn and compared to minimum Ψ at midday, which defines a ‘safety’ margin for leaf functioning. Based on the diurnal dynamics of carbohydrates, the safety margin for turgor loss at midday could be underestimated by as much as half in some cases. 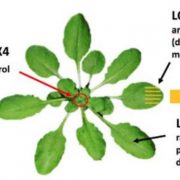 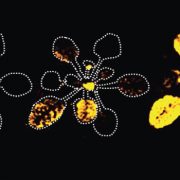 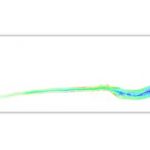 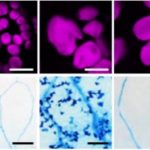