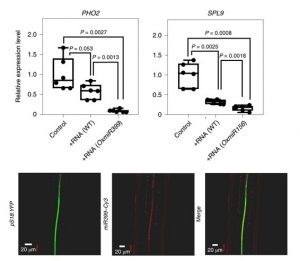 Small RNAs (sRNAs) are 21- to 24-nucleotide non-coding RNAs that induce gene silencing by targeting specific mRNAs for degradation. They regulate a plethora of developmental and physiological processes. Based on their biogenesis they are classified into two groups: micro-RNAs (miRNAs) and siRNAs. Within a plant, sRNAs act locally or over long distances by moving throughout the vasculature. Additionally, sRNAs can move between plants and interacting organisms and induce cross-kingdom/organism RNA silencing. However, whether plants can uptake sRNAs from their environment or use them as signaling molecules in plant-to-plant communication remains unknown. Here, Betti et al. show that two well studied miRNAs produced by plants, miR156 and miR399, act as signaling molecules affecting gene expression in nearby plants. By exogenously applying miR156 and miR399 to Arabidopsis seedling in vitro, the authors demonstrate that both miRNAs affect expression of their targets, the E2 conjugase PHO2 and the SQUAMOSA-PROMOTER BINDING PROTEIN-LIKE (SPL) transcription factors respectively. Additionally, the authors observed miR399 uptake and transportation through the xylem and found that silencing functions of both miRNAs required the action of ARGONAUTE1 protein (AGO1) and RNA-DEPENDENT RNA POLYMERASE6 (RDR6), which implies the production of secondary small interfering RNAs. Co-cultivation experiments of WT and plants that overexpress miR399 or miR156 showed that the high secreted levels of miRNAs from the overexpression lines induced equivalent low expression levels of PHO2 and SPL targets in WT, suggesting a plant-to-plant interaction mediating gene silencing. Together, these results provide evidence of a signaling mechanism that involves miRNAs and gene silencing in plant communication. (Summary by Daniela Ramos @DanielaR_cruz) Nature Plants 10.1038/s41477-021-01005-w. 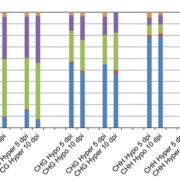 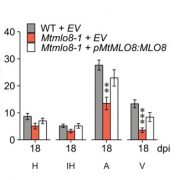 Pollinators contribute to the maintenance of flowering plant diversity (Nat... 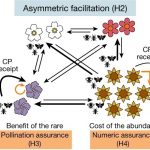 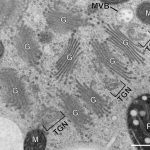