Rubisco (ribulose-1,5-bisphosphate carboxylase/oxygenase) is the central enzyme of photosynthetic carbon assimilation in the Calvin-Benson-Bassham (CBB) cycle. It catalyses the carboxylation of one molecule of ribulose-1,5-bisphosphate (RuBP) producing two molecules of 3-phosphoglycerate (3PGA), from which sugars, starch, amino acids and fatty acids are synthesised (Bhat et al., 2017). The catalytically active form of Rubisco is tightly regulated. Its activation (carbamylation) occurs spontaneously in the presence of CO2 and Mg2+ and allows the correct position of RuBP for efficient electrophilic attack by the second CO2 molecule that will be fixed in the CBB cycle (Andersson, 2008). Instead, Rubisco activity is impaired by several sugar phosphates, even by excess RuBP (Sulpice et al., 2007). The release of sugar phosphates from Rubisco is facilitated by its catalytic chaperone Rubisco activase (Rca), allowing spontaneous re‐carbamylation (Portis, 2003). Rca belongs to the AAA+ protein superfamily and uses ATP to remodel Rubisco and release the sugar phosphate inhibitors (Mueller-Cajar, 2017). Although Rca enhances Rubisco activity, it is heat labile, so during heat stress it limits the photosynthetic machinery. In light of the negative impact of global warming on crop productivity, improving the thermostability of Rca is considered one of the most promising approaches to enhance heat tolerance of photosynthesis.

In this issue of Plant Physiology, Scafaro et al. (2019) report the relative expression and protein abundance of the three wheat Rca isoforms – TaRca1-β, TaRca2-α and TaRca2-β – and characterise their in vitro thermal stability. Spring and winter wheat cultivars at different developmental stages were exposed to high temperatures (36°C and 38°C, respectively). Heat induced the expression of the TaRca1-β gene in both cultivars, suggesting that the wheat heat stress response is mediated by the corresponding protein. To test this hypothesis, the three TaRca isoforms were extracted and isolated from leaves of the two cultivars and used for an Rca in vitro activity assay. Furthermore, the temperature responsible for the loss of enzyme functionality and structural integrity (Tm) was determined by differential scanning fluorimetry (DSF) and enzymatic rate of pre-heated protein. These different approaches confirmed that the TaRca1-β isoform is indeed a heat stable variant of Rca for wheat while the TaRca2-β isoform is the most heat sensitive. In order to improve TaRca2-β thermal stability, Scafaro and co-workers generated different mutations based on protein sequence alignments with thermostable wheat and rice isoforms and with protein sequences of cold and warm adapted species. They discovered three to 11 mutated amino acids able to confer thermostability to the enzyme and each mutation gave an additive affect to the thermal stability of the enzyme.

In conclusion, Scafaro et al. (2019) found that inducing the expression of TaRca1-β – the most thermally stable Rca isoform in wheat – is a mechanism that wheat has evolved in response to heat stress. Moreover, thermal stability of the TaRca2-β isoform was increased in the mutational variants created. Their discoveries suggest that engineering Rca and/or manipulating its regulation could be possible strategies to improve Rubisco carboxylation efficiency in crop plants. Also promising could be co-engineering of Rubisco and Rca, mimicking the process that probably occurred during natural evolution. However, additional work is needed, especially in planta studies, to test the hypothesis that thermostable Rca can improve photosynthesis under elevated temperature.

How Autophagy Is Activated under Extended Dark Conditions 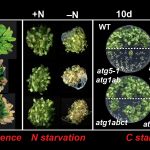 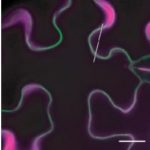 Keeping an Eye on Lutein Stability
Scroll to top