Paul, Saha, et.al investigated the Improvement of nitrogen nutrition in rice by interaction with the basidiomycete Rhodotorula mucilaginosa and its N2-fixing endobacteria. Plant Cell https://doi.org/10.1105/tpc.19.00385

Background: Nitrogen limits crop yield and improvement of nutrition remains a key goal for crop research; one approach to improve nitrogen nutrition is identifying plant-interacting microbes that fix atmospheric nitrogen (N2) into forms that plants can use, such as ammonium. Rhodotorula mucilaginosa JGTA-S1, is a unicellular fungus isolated from the internal tissues of narrowleaf cattail (Typha angustifolia). The pink-colored yeast improves the growth of its host cattail and the JGTA-S1 genome contains many genes supporting its life as a plant-associated beneficial fungus. JGTA-S1 could not use nitrate––the most common form of nitrogen available in the soil–– and could not convert nitrate and nitrite to ammonium. However, the yeast contains nitrogen-fixing bacteria inside its cells that may help it fix nitrogen. This suggested that JGTA-S1 depends on its host or its endogenous diazotrophs for ammonium.

Question: We wanted to see if JGTA-S1 could use the crop plant rice as host and promote its growth and nutrition, especially nitrogen nutrition. We also wanted to study the role of its endosymbiotic bacteria in controlling yeast and plant growth.

Findings: We found that JGTA-S1 colonizes rice as host and increases growth and nitrogen content in the plant. Biological-nitrogen-fixation is performed by prokaryotes only and involves conversion of atmospheric nitrogen into usable form. JGTA-S1 grows in nitrogen-free media and fixes nitrogen aided by its endosymbiotic nitrogen-fixing bacteria one of which is Pseudomonas stutzeri. The endofungal diazotrophs are important for the viability of JGTA-S1 and has important role in increasing biomass and ammonium content of plant treated with the yeast. JGTA-S1 also fixes nitrogen in planta and supplies the fixed nitrogen to the plant. In association with plants, the yeast forms filamentous structures which are actively penetrated by Pseudomonas stutzeri. We demonstrate a tripartite interaction between endobacteria, yeast JGTA-S1 and rice that improves nitrogen nutrition in plants. 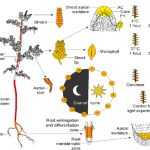