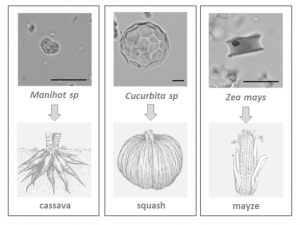 To date, archeobotanical and genetic studies indicated four centers of plant cultivation in the early Holocene: China and the Near East in the Old World, and southwestern Mexico and northwestern South America in the New World. Recent research of Lombardo et al. revealed that Llanos de Moxos (Bolivia) in southwestern Amazonia could also be a hotspot of plant domestication. From 10,850 calibrated years before present (cal. yr bp), the first inhabitants of this region created artificial forest islands within seasonally flooded savannah. As revealed by the analysis of microfossils found in surveyed sites, these fertile patches (with an average size of 0.5 hectares) were probably the ecosystem in which human settlers domesticated important plant species including manioc (cassava), squash and maize. From this region, the oldest evidence of plant cultivation came from the identification of: heart-shaped phytolith related to Manihot sp. dated to 10,350 cal. yr bp, spherical phytoliths derived from the rind of Cucurbita sp. in layers dated to 10,250 cal yr bp, and rondel phytoliths produced in the cob of a partially domesticated variety of maize dated to 6,850 cal. yr bp. The authors outline how humans have engineered the environment for farming since they colonized Amazonia in the early Holocene. Nowadays, these human-made forest islands play crucial roles in the conservation of biodiversity, as they serve as feeding and roosting sites for some threatened bird species. (Summary by Michela Osnato) Nature 10.1038/s41586-020-2162-7 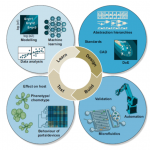 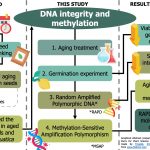