Comparative analyses of wild and domesticated accessions have previously identified several aboveground domestication-related traits in common bean (Phaseolus vulgaris). Genetic analyses of these traits suggested the presence of several major quantitative trait loci (QTLs) with large effects.  However, due to the subterranean growth habit of root systems, root traits have been omitted from previous analyses of plant domestication. It is conceivable, however, that domestication-related changes in roots may have occurred due to direct selection for certain aboveground traits that also 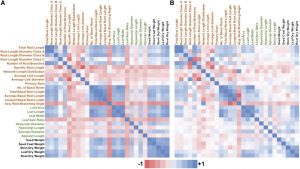 affect roots, or to the indirect selection of root traits that improved aboveground plant performance. To test these ideas, Singh et al. (10.1104/pp.18.01509) conducted a comprehensive phenotypic analysis using multivariate statistics and genetic characterization of 28 root and shoot traits to evaluate effects of domestication on the root system architecture of P. vulgaris. Multivariate analysis of root traits in wild and domesticated accessions showed that seed weight affects many root traits of young seedlings. Sequential and methodical scanning of the genome confirmed the significant effect of seed weight on root traits and identified QTLs that control seed weight, root architecture, shoot and root traits, and shoot traits alone. The authors conclude that domestication in P. vulgaris was associated with genes that were selected directly to increase seed weight but which had a significant effect on early root growth through a developmental pleiotropic effect. Domestication involved genes controlling root system architecture that were apparently the product of indirect selection.

Synthesis of a Plant-Based Drug for the Potential Treatment of Type-2 Diabe... 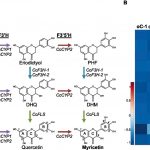 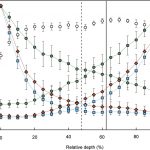