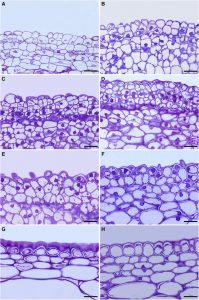 The waxy cuticle that covers the aerial parts of leaves, fruits, and nonlignified stems of land plants is chemically heterogeneous, with lipids representing between 60% to 80% of the cuticle, depending on the plant organ and species. These lipids can be polymerized, represented by cutin, or non-polymerized, i.e. waxes located either inside or on the cuticle. Cutin is the main framework of the cuticle; it is a polyester formed after the condensation of polyhydroxy fatty acids synthetized in the epidermal cells. Two mechanisms of cutin deposition have been identified in tomato (Solanum lycopersicum) fruit: the first mechanism involves cutinsomes, self-assembled particles composed of esterified cutin monomers. Cutinsomes are involved in the synthesis of the procuticle during cell division and provide a template for further cutin deposition; the second mechanism involves CUTIN SYNTHASE1 (CUS1), an acyl transferase enzyme that links cutin monomers, and contributes to the massive cuticle deposition during the early stages of cell expansion. CUS1 has been characterized as an extracellular protein and located by means of antibodies to the cutinized region of the outer epidermal cell wall. Putative orthologs of CUS1 have been identified in other species, suggesting a conserved cutin formation mechanism among several land plant groups.  Segado et al. (10.1104/pp.20.00516) have analyzed the contribution of both mechanisms to cuticle deposition and their potential interaction during tomato (Solanum lycopersicum) fruit development. They conclude that there is a clear differentiation in cuticle synthesis during organ growth between the initial cell division and the later cell expansion period. Cutinsomes are involved in cutin deposition during cell division, providing a primary protective procuticle. Later on, CUS1 participates in cutin synthesis from the onset of the cell expansion until the mature green stage. CUS1 is also involved in the coordinated development of the cutinized and non-cutinized regions of the outer epidermal cell wall and affects the epidermal cell size and shape. 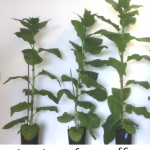 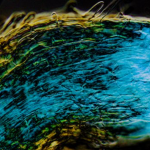 Dwarfed no longer: how one mutant can help the other
Scroll to top