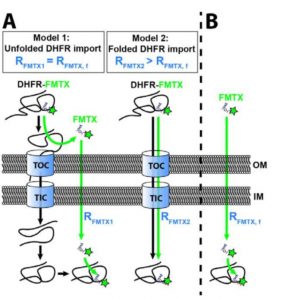 Most of the proteins that function inside of mitochondria or chloroplasts are encoded in the nucleus, translated in the cytosol, and imported through one or two membrane-localized translocons. (In mitochondria the outer- and inner-membrane translocons are called TOM and TIM, and in chloroplasts they are TOC and TIC). Mitochondrial studies indicate that proteins are translocated unfolded, and for chloroplast translocons this has been the assumption at least for larger proteins. Ganesan et al. tested this assumption using dihydrofolate reductase (DHFR) and its ligand, methotrexate (MTX), which non-covalently binds to and stabilizes folded DHFR. The authors showed that fluorescently labelled MTX is imported more rapidly and in an ATP-dependent manner in the presence of DHFR, indicating that it is carried in with the folded protein. These results indicate that the functional pore size of the chloroplast translocons is larger than previously assumed. Fixed-diameter probe studies confirmed this finding, with “critical implications regarding the mechanism and structure of the TOC/TIC translocons.” (Summary by Mary Williams) Plant Cell  10.1105/tpc.18.00427 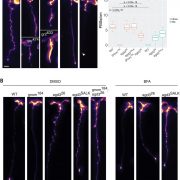 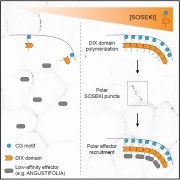