Background: Vascular tissues transport water, salts, and photosynthates within the plant body. The xylem moves water and salts from the roots up, and the phloem distributes water and sugars throughout the plant. As the plant grows, the stem grows thicker in part because the woody vascular tissues expand. Between the xylem and phloem are stem cells that divide and develop into xylem and phloem. These divisions increase vascular tissue size and provide structural support to the plant. Due to the importance of vascular tissues, both the divisions and fate of stem cells must be tightly controlled. Several proteins have been found to control cell division rate or xylem/phloem fate in vascular stem cells.

Question: PXY controls vascular stem cell division rate but is also needed to organize xylem and phloem into two separate domains. However, we don’t know how PXY can control these two separate processes. Our goal was to identify genetic interactions that help explain the role of PXY

Findings: We looked at the transcriptional regulation of vascular genes in Arabidopsis thaliana. We identified interactions between DNA-binding proteins and regulatory DNA sequences using enhanced Yeast One Hybrid assays. We constructed a potential transcriptional regulatory network from the 690 interactions. The network contains an interesting feed-forward loop controlled by PXY. In our network, LBD4 is regulated by both WOX14 and TMO6, but WOX14 also regulates TMO6. As a result, WOX14 influences LBD4 in two ways: directly and indirectly via TMO6. We studied the genetic interactions between these components and found that PXY regulates the components of this feed-forward loop to control vascular stem cell divisions. In addition, PXY regulation of LBD4 marks the boundary between stem cells and phloem cells. Thus, we identified genetic mechanisms used by PXY to regulate both division rate and fate separation.

Next Steps: The challenges are to understand how network interactions change in a cell-type specific manner through development and to identify interactions that have been modified through evolution. Wood is an important biomaterial and carbon sink. Our network provides a basis for experiments aimed at modifying plants to maximize wood formation. 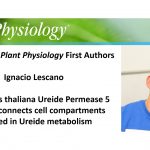 Phosphorus Sensing by LST8 Acts as a TOR Guide for Cell Growth in Chlamydom...
Scroll to top