Modern-day chloroplasts are the descendants of a photosynthetic cyanobacterium that took up residence inside the cytoplasm of a eukaryotic cell. Since this initial cohabitation agreement, the cyanobacterial endosymbiont has dumped most of its genome into the host eukaryotic genome. This creates an engineering nightmare: how do proteins, translated in the cytosol by the host ribosomes but intended for the chloroplast, end up in their site of action? Stroma- or thylakoid-localized proteins cross both outer and inner membranes and use a transit peptide (TP) to mark them for import. Their passage through each outer and inner membranes is facilitated by the TOC and TIC complexes (Translocon of the Outer and Inner Chloroplast membrane, respectively).

The situation is more elusive for proteins destined for the outer chloroplast membrane, which is related to bacterial outer membranes due to its (cyano)bacterial origin. Many outer membrane (OM) proteins contain β-barrel transmembrane domains and lack a TP. Two exceptions are the TOC component Toc75 and its paralog OEP80: both have a TP and a β-barrel. By systematically dissecting the contribution to import and membrane sorting of OEP80, Day, Inoue and Theg (2019) provide a consensus picture of the mechanisms used by plant cells to target proteins to the chloroplast OM.

Toc75 and OEP80 belong to the prokaryotic Omp85 superfamily of β-barrel membrane proteins. Although their primary structures are only 24% identical (and 41% similar), they share the same secondary structure: a TP, three polypeptide-transport associated domains (POTRA) that reside in the inter-membrane space (IMS), and a transmembrane β-barrel. Using in vitro chloroplast import assays or transient infiltration in Nicotiana benthamiana, the authors determined the contribution of the individual domains found in OEP80 to 1) import into chloroplasts, and 2) insertion into the OM (see Figure). 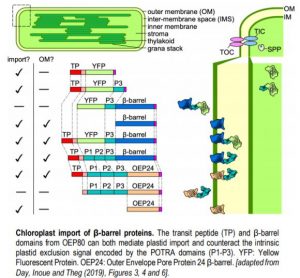 First, the authors confirmed that the TP of OEP80 is functional: deleting the first 93 amino acids prevents association of OEP80 with chloroplasts. In addition, the TP is processed following import by the stromal processing peptidase. These results could explain the lack of phenotype for the T-DNA allele oep80-3, which only removed the first 52 amino acids and still resulted in a plastid-localized protein (Patel et al., 2008). Surprisingly, further deletion of the POTRA domains restores proper chloroplast import, suggesting that 1) the OEP80 β-barrel is capable of chloroplast targeting, and 2) POTRA domains antagonize chloroplast targeting. Indeed, a fusion protein between the OM protein OEP24 and the β-barrel from OEP80 cannot be imported into the organelle, although OEP24 itself can. Adding the TP from OEP80 to this new protein restores import and reveals the role of the TP in Toc75 and OEP80: to combat the influence of POTRA domains, nevertheless critical for function. The transmembrane β-barrel itself provides the membrane anchor into the OM, in addition to acting as a functional TP in OM proteins without a TP.

A classic plastid protein with a TP is the small subunit of RuBisCO (RSSU). It can be used to compete uptake of other proteins taking the same route through the TOC complex. The authors find that OEP80 import can be greatly decreased by the precursor form of RSSU (with TP), but not mature RSSU (without TP). The same is true for OEP24, which lacks a TP but contains a β-barrel. TOC components Toc75 and Toc159 can physically interact with OEP80 and OEP24 via their β-barrel and TP (when present). Therefore, β-barrel proteins enter through the TOC complex.

Open questions include how OM proteins with β-barrels escape the TIC complex. The fact that the TP from both Toc75 and OEP80 is cleaved suggests that the journey of both proteins does take them to the stroma for a while but is cut short by signal processing peptidase. 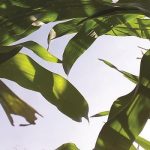 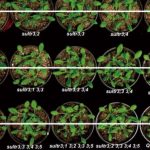