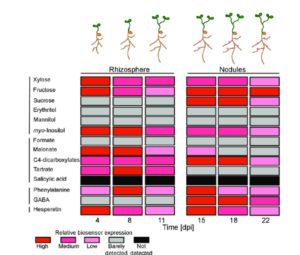 Biosensors are powerful tools that provide readouts for various small molecules so that they can be detected and located. Pini et al. have developed a set of biosensors for expression in bacteria (Rhizobium leguminosarum) that reveal  some of the small molecules (including key sugars, polyols, organic acids, amino acids and flavonoids) secreted by the roots of its symbiotic partner pea (Pisum sativum). The authors developed biosensors by fusing the promoter element of a gene specifically expressed by a small molecule to the luciferase reporter lux. Nine of the 14 biosensors only responded to a single compound. The biosensors allowed the authors to spatially and temporally track rhizosphere metabolites during nodulation and to evaluate how different mutant backgrounds affected these metabolites. Plant Physiol.  10.​1104/​pp.​16.​01302 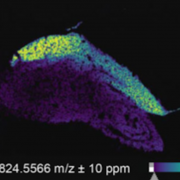 Shielding the oil reserves: the scutellum as a source of chemical defenses (Plant Physiol.) 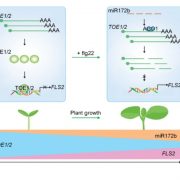 Towards an understanding of spiral patterning in the Sargassum muticum shoot...

The RxLR motif of the Phytophthora infestans effector AVR3a is cleaved before...
Scroll to top