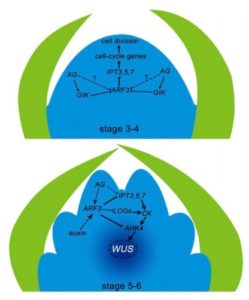 The cross-talk between cytokinin and auxin has been well established from different developmental perspective. In this article, Zhang et al. have explored the role of cytokinin and auxin cross-talk in floral meristem (FM) determinacy. The authors demonstrated that auxin induces the expression of ARF3 (AUXIN RESPONSE FACTOR3) and ARF3 regulates both cytokinin biosynthesis and signaling. ARF3 represses the cytokinin biosynthesis genes IPT (ISOPENTENYL TRANSFERASE) and LOG (LONELY GUY); and signaling components AHK4 (ARABIDOPSIS HISTIDINE KINASE 4). In addition, AGAMOUS (AG) controls the expression of ARF3 and IPTs to regulate FM maintenance and termination via cell division. This work has established the role of ARF3, which acts synergistically with AG to regulate cytokinin biosynthesis and signaling for FM maintenance and determinacy. (Summary by Arif Ashraf) Plant Cell: 10.1105/tpc.17.00705

Photoperiodic control of seasonal growth is mediated by ABA acting on cell-cell...