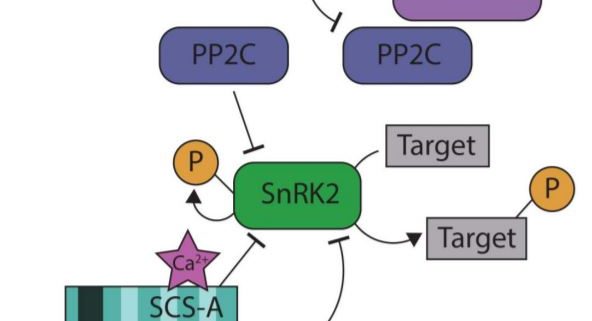 Reacting to the environment requires not only activating signaling cascades but also modulating the activity of individual components in a context- and time-dependent manner. For example, under non-stress conditions protein phosphatases 2C (PP2C) keep the SnRK2 abscisic acid (ABA)-dependent protein kinases in an inactive state  (Dupeux et al., 2011). Upon exposure to stress, ABA activates the PYR/PYL receptors, which interact with the PP2Cs (Park et al., 2009), releasing the SnRK2 protein kinases (Figure 1). ABA-dependent SnRK2s  have important functions in regulating stomatal closure and growth (Fujii and Zhu, 2009), but their activity is only transient (Boudsocq et al., 2007; McLoughlin et al., 2012). SnRKs interact with other proteins that modify their activities, including calcium-binding proteins. Previously, Bucholc et al., (2011) screened for proteins interacting with osmotic stress-activated protein kinase (NtOSAK), a member of the SnRK2 family in Nicotiana tabacum. One of the SnRK2 interactors identified   is a calcium-binding protein they named SnRK-Calcium-binding Sensor (SCS), which inhibits SnRK2 kinase activity upon Ca2+ binding (Bucholc et al., 2011). SCS was established to play a role in seed germination but the nature of the interaction between SnRK2 and SCS, and its significance for other ABA-dependent processes were unknown. 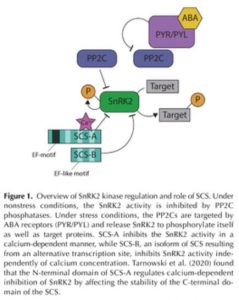 In this issue of Plant Physiology, Tarnowski et al. (2019) describe two isoforms of SCS that result from alternative transcription start sites. SCS-A was initially identified by Bucholc et al., (2011) as the SnRK interactor. It contains one canonical EF-hand motif at the N-terminal end of the protein and three EF-hand like motifs. The SCS-B isoform is shorter by 110 amino acids and contains only two EF-hand-like motifs (Figure 1). While canonical EF-hand motifs are known to facilitate Ca2+ binding (Lewit-Bentley and Réty, 2000), the contribution of EF-hand like motifs is less studied. Although both isoforms were able to bind Ca2+, only SCS-A requires Ca2+ to inhibit SnRK activity. By examining the conformational changes of SCS-A and SCS-B through circular dichroism spectroscopy and hydrogen/deuterium exchange, (Tarnowski et al., 2019) observed that only SCS-A undergoes detectable conformational changes upon binding to Ca2+. The group found that the C-terminal domain is stable in SCS-B but not in SCS-A. Binding Ca2+ by SCS-A results in a conformational change of the protein, which makes the C-terminal part more similar to SCS-B, stabilizing the region near the third EF-hand like motif.

SCS-A was previously shown to be involved in promoting seed germination (Bucholc et al., 2011), but the role of both SCS isoforms in other processes was not known. Both isoforms were transcriptionally induced upon ABA and salt stress exposure, although SCS-A transcript was more abundant than SCS-B. The Arabidopsis plants with no functional SCS exhibited improved drought tolerance, similar to lack of function in other SnRK2 inhibitors, like PP2C (Tarnowski et al., 2019). The overexpression of either individual isoform did not completely reverse the sensitivity to drought stress to the wild-type levels, suggesting shows that both isoforms of SCS could play distinct, non-overlapping roles in the inactivation of SnRK. Therefore, these two differentially regulated isoforms have different, important parts in the tale of how plant cells integrate the calcium signaling input into protein kinase activity at specific timepoints.

Family dynamics within the seed: Identification of new cell types in maize ... 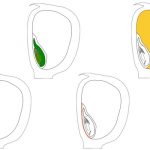 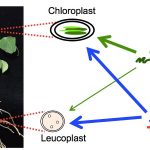