Background: One of the most important visual indicators of fruit ripening in apple is the color change caused by anthocyanin accumulation and chlorophyll degradation. We previously showed that the apple ethylene response factor (ERF) MdERF17 contributes to chlorophyll (Chl) degradation in the fruit peel via transactivation of chlorophyll degradation-related genes. MAPK cascades play an essential role in plant growth and development and are involved in the regulation of plant light responses. We also recently showed that apple MPK4 is activated by light and regulates anthocyanin accumulation by phosphorylating MYB1 in apple peel. We know relatively little about the molecular mechanisms coordinating the control of Chl loss and anthocyanin accumulation or whether they are coordinately regulated by external stimuli during ripening.

Question: As apple fruits mature, anthocyanin accumulation occurs concomitantly with loss of Chl; however, the molecular systems that bridge the two processes have not been elucidated. We wanted to test possible connections between diurnal rhythms and MAPK pathways via MdERF17 function during fruit coloration. 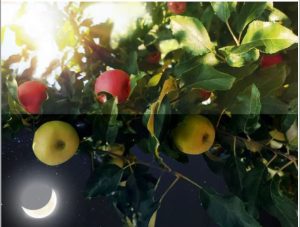 Findings: We found that MdMPK4-14G directly interacts with and phosphorylates MdERF17 in vitro and in vivo. MdMPK4-14G is essential for fruit peel degreening, since overexpression of a constitutively active form of MdMPK4-14G in fruit peel led to substantial Chl degradation, while the suppression of MdMPK4-14G displayed an opposite phenotype. The increased levels of phosphorylated MdERF17 at night are necessary for promoting Chl degradation in apple peel and variation in the Ser repeat number in ERF17 affects the accumulation of phosphorylated MdERF17. We established that MdMPK4s are involved in apple peel coloration and revealed the molecular mechanisms by which two MdMPK4 proteins regulate Chl breakdown and anthocyanin accumulation in response to light/dark transitions. 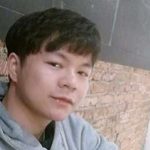 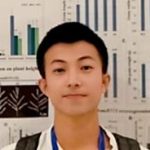