Hou et al. report a DEAD-box helicase as a component of the RNA microprocessor complex and highlight its importance in embryogenesis. Plant Cell http://bit.ly/2LhT7LO

b University of Chinese Academy of Sciences, Beijing 100049, China 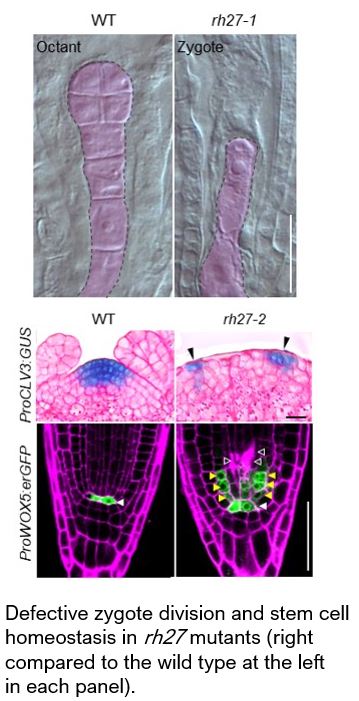 Background: In higher plants, embryogenesis initiates from a zygote, followed by cell divisions and differentiation to form a mature embryo. During embryo development, stem cells in shoot apical meristem (SAM) and root apical meristem (RAM) are established; these stem cells allow plants to continuously generate new tissues and organs during post-embryonic growth. To date, about ten genes essential for zygote division have been reported, and transcription factors, peptide hormones and microRNAs (miRNAs) critical for stem cell homeostasis are known. DEAD-box RNA helicases regulate RNA metabolism such as mRNA export, mRNA splicing and rRNA processing, but whether they are involved in zygote division and stem cell homeostasis had remained elusive.

Question: We took a molecular genetic approach in Arabidopsis to identify genes that are essential for the initiation of zygote divisions and for the maintenance of stem cells in SAM and RAM.

Findings: We observed that rh27-1, a loss-of-function mutation of the DEAD-box RNA helicase 27 (RH27), is zygote-lethal, and rh27-2, a partial loss-of-function mutation of the same gene, severely disrupted stem cell homeostasis in both the SAM and the RAM. RH27 is expressed in the zygote and embryos during embryogenesis, and in shoot apices and root tips after seed germination. The abundances of several miRNAs related to stem cell homeostasis are reduced in shoot apices and root tips of rh27-2, and the expressions of their target genes are increased. Further analyses revealed that the levels of primary miRNAs (pri-miRNAs) also decreased in rh27-2. RH27 is able to bind pri-miRNAs in vivo, and interacts with miRNA biogenesis components including DCL1, DDL, HYL1 and SE in nucleus, suggesting a critical role of RH27 in zygote division, stem cell homeostasis and miRNA biogenesis.

Next steps: Further studies are needed to elucidate the role of miRNA in zygote division, and if a DEAD-box RNA helicase is a general component of miRNA biogenesis in plants. 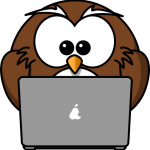 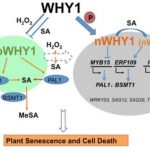 Here, there and everywhere: Plastid- and nuclear-localized WHIRLY1 regulates...
Scroll to top