Acyl lipids are a wide range of compounds that have diverse functions in membrane synthesis, energy storage, and signal transduction. Fatty acids are key building blocks of acyl lipids that are synthesized by the fatty acid synthase complex via sequential condensation of two-carbon units to reach lengths of up to 18 carbons (Li-Beisson et al., 2013). During this process, the elongating acyl chains are attached to Acyl Carrier Proteins (ACPs) through a phosphopantetheine group linked to a serine residue of ACPs to form acyl-ACPs, which are central components in de novo fatty acid synthesis. However, the roles of acyl-ACPs in lipid metabolism are rarely studied due to a lack of methods to accurately quantify individual acyl-ACPs and their cargoes. 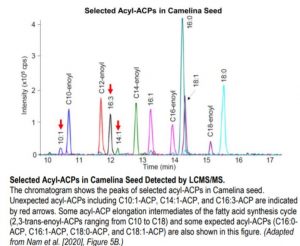 It sounds straightforward, but ACPs are encoded by small gene families and mass differences, from their amino acid differences, obscure the relatively small variations in the attached acyl chains, making their accurate identification a daunting task. To address this issue, the authors took advantage of a highly conserved region (Asp-Ser-Leu-Asp, DSLD) in ACPs that happens to flank the site of acyl chain attachment to remove the majority of ACP via proteolytic hydrolysis. The endoproteinase Asp-N was used to cleave the peptide bonds N-terminal to aspartate residues in the DSLD region, which produced a tripeptide attached to the 4’-phosphopantetheine group and the acyl chain (acyl-4-phophopantetheine-DSL). The digested products with varying acyl chains could then be sensitively detected by LC-MS/MS.

The next challenge was to find appropriate acyl-ACP standards that are both chemically equivalent to the analytes and distinguishable from sample metabolites. The authors synthesized isotopically labeled acyl-ACP standards using B. subtilis 4’-phosphopantetheinyl transferase (Sfp) expressed in Escherichia coli to transfer the acyl chain from acyl-CoA onto 15N-apo-ACP expressed in E. coli grown in media containing 15NH4Cl. Calibration curves were generated for apo-ACP, acyl-ACPs with saturated acyl chains ranging from 2 to 18 carbons, as well as 16:1 and 18:1 acyl-ACPs using serially diluted unlabeled standards with a constant concentration of 15N-labeled acyl-ACPs.

With the method established, the authors demonstrated the utility of this approach in lipid research by analyzing acyl-ACPs in leaf and seed tissues of Camelina sativa. It was shown that 18:1-ACP was predominant in Camelina seed and the total amount of acyl-ACPs in seed was about 17-fold higher than that in leaves. Acyl-ACP elongation intermediates (3-hydroxyacyl-ACPs and 2, 3-trans-enoyl-ACPs), though present in trace amounts, were detected in Camelina seed, demonstrating the sensitivity of this method. What was surprising was the discovery of unanticipated monounsaturated medium-chain and polyunsaturated long-chain acyl-ACPs (C10:1, C14:1, and C16:3) in Camelina seed (see figure), suggesting that our current understanding of fatty acid synthesis and lipid metabolism is incomplete.

Compared to previous attempts to measure acyl-ACPs, this approach not only is more accurate and sensitive but also allows quantification of short-chain acyl-ACPs, and thus represents a methodological breakthrough in lipid research. Given that the DSLD region is highly conserved in type II ACPs across species, this method is applicable to many organisms using type II fatty acid synthesis and will benefit a large community of researchers. This robust method will likely inspire more research to extend our knowledge about the mechanistic basis for lipid metabolism.

To Catch Crop Genes in Batch 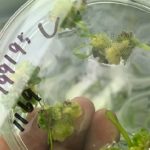 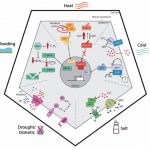