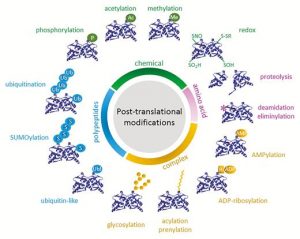 I guess we’re well past the stage of thinking “one gene – one protein”, but even a single polypeptide isn’t really one protein, due to the huge number of different types of post-translational modification (PTM) it can be subjected to. These are summarized in the illustration that accompanies the editorial by Spoel (10.1093/jxb/ery295) of this special issue of J. Exp. Bot. PTMs can be chemical (phosphorylation, acetylation, redox), involve ubiquitination or SUMOylation, involve changes in primary sequence (proteolysis, deamidation), or other, including glycosylation and prenylation. Some PTMs are reversible, others irreversible, and most are mediated by sets of enzymes called writers, readers and erasers that add, interact with or remove these PTMs. Consider this: “For example, in Arabidopsis phosphorylation is regulated by more than 1100 genes encoding protein kinases and phosphatases, whereas over 1600 genes encode ubiquitin ligases and deubiquitinases.” The papers colletected in this special issue span from basic to applied, and highlight how rapidly our understanding is expanding thanks to several new experimental technologies. (Summary by Mary Williams) J. Exp. Bot. Volume 69, Issue 19, 31 August 2018 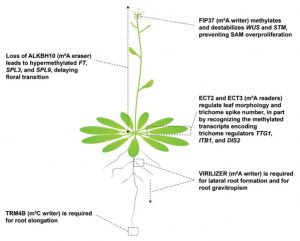 Just like the epigenome is the collection of epigenetic marks on DNA, the epitranscriptome is the collection of epigenetic marks on mRNA. Vandivier and Gregory review our current understanding of the epitranscriptome, with a focus on N6-methyladenosine (m6A) and 5-methylcytosine (m5C), and their various writers, readers and erasers.  Transcriptome-wide sequencing has revealed that these marks occur extensively. Complementing the high-throughput mapping efforts, there is now a good set of genetic studies showing the importance of these epitranscriptomic marks on processes such as leaf and root development, timing of flowering, and stress responses. (Summary by Mary Williams)  J. Exp. Bot.  10.1093/jxb/ery262 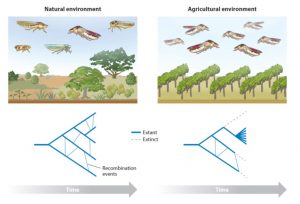 The plant pathogenic bacterium Xylella fastidiosa occurs widely and often asymptomatically, yet it is associated with a few seriously bad disease outbreaks, the most recent affecting olive trees in southern Italy and adjoining regions. It also is the causal agent of Pierce’s Disease of grapevine, citrus variegated chlorosis (CVC) and coffee leaf scorch. Sicard et al. review all aspects of the interaction between Xylella fastidiosa and its diverse hosts, as well as the insect vectors responsible for its spread, with a focus on understanding why in some cases this relatively benign bacterium becomes a dangerous pest. One key take-home message is that as landscapes shift from natural, diverse environments to less diverse agricultural environments, the bacterium shifts from a harmless generalist to a destructive specialist. (Summary by Mary Williams) Annu. Rev. Phytopathol. 10.1146/annurev-phyto-080417-045849

Carboxysome encapsulation of the CO2-fixing enzyme Rubisco in tobacco chloroplasts 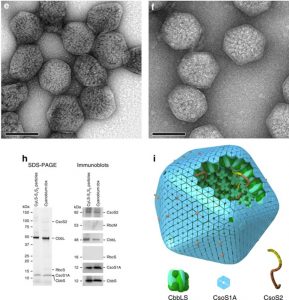 One of the fundamental challenges facing terrestrial plants occurs when CO2 levels are depleted at Rubisco, causing its inefficient oxygenase activity to dominate. Some plants minimize this problem by adding a carbon-fixing step upstream of Rubisco, and various algae and cyanobacteria sequester Rubisco into compartments such as carboxysomes into which they pump CO2. Engineering plants to produce the carboxysome / CO2 pump should enable them to operate with greater water-use efficiency (due to less need to continually open their stomata) and greater nitrogen-use efficiency (due to less need to synthetize large amounts of Rubisco).  Long et al. describe their efforts to produce Rubisco-sequestering carboxysomes in tobacco chloroplasts. Surprisingly, they were able to achieve this by introducing only a subset of the genes involved in carboxysome formation in cyanobacteria. Because they replaced tobacco’s own Rubisco with the low-CO2 specificity cyanobacteria enzyme, the resulting plants required elevated CO2; this limitation should be overcome by the next engineering step in which the CO2 pump is introduced. (Summary by Mary Williams) Nature Comms. 10.1038/s41467-018-06044-0

A single transcription factor promotes both yield and immunity in rice ($) 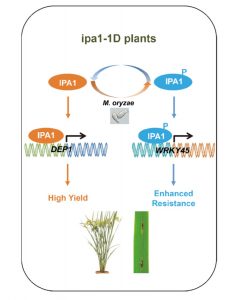 Plants regularly prioritize either growth or defense, leading to reduced growth rate when the plant is under attack. Wang et al. have identified a simple switch  in rice that demonstrates this principle beautifully. The Ideal Plant Architecture 1 (IPA1) transcription factor is involved in controlling grain yield by reducing the number of unproductive tillers. The authors found that the ipa1-1D allele that confers higher grain yield also confers protection against the rice blast fungus.  Fungal infection induces IPA1 phosphorylation, and the phosphorylated form of IPA1 activates a different subset of genes than unphosphorylated IPA1. This reversible phosphorylation thus directly shifts the expressed genes from those promoting growth to those promoting defense. As the authors summarize, “Changing DNA binding specificity via phosphorylation of an amino acid to nimbly control different outcomes may prove to be a widespread phenomenon.” (Summary by Mary Williams) Science 10.1126/science.aat7675

Sex chromosome restructure has happened frequently during the evolution of eukaryotes, often resulting in highly differentiated sex chromosomes. However, little is known about this process in plants. The wild North American octoploid strawberries (Fragaria) have separate sexes with homomorphic, female heterogametic (ZW) inheritance. However, “sex” maps to three different chromosomes in different taxa. Tennessen and colleagues use genomic and phylogenetic analyses to understand female-specific regions of DNA which are associated with sex. The genomic location of these regions has changed over time. Each time the genomic locations changed, the size of the hemizygous female-specific sequence on the W sex chromosome increased. This indicates that plant sex regions can “jump”, potentially aiding in gathering new genes into linkage with sex. (Summary by Julia Miller) PLOS Biol. 10.1371/journal.pbio.2006062 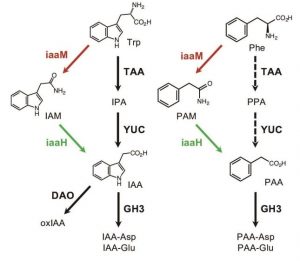 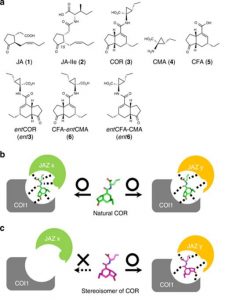 Many plant hormones have pleiotropic effects, switching on and off multiple, seemingly unrelated processes. As an example, jasmonates both turn on herbivore defense responses and suppress growth. Takaoka et al. have elegantly separated these, by developing a jasmonate mimic that only activates defences. The interaction of this mimic causes the jasmonate co-receptor COI1 to interact only with a subset of JAZ transcriptional repressors. The identification of this selective agonist provides an opportunity to develop new methods for conferring plant protection against herbivores. (Summary by Mary Williams) Nature Comms 10.1038/s41467-018-06135-y 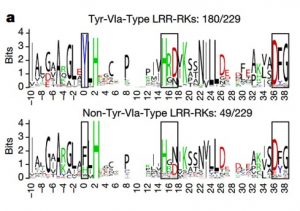 It’s often surprising and a bit confusing when a protein that has been implicated in one process reveals itself to be involved in a totally different process as well. BAK1 (also known as SERK3) was first identified as a co-receptor for brassinosteroids (BRs), forming ligand-induced heterodimers with BRI1, a leucine-rich repeat receptor kinases (LRR-RKs). BAK1 was later found to also form heterodimers with key LRR-RK immune receptors including FLS2 and EFR. Unravelling the specificity of these interactions has been complicated because epitope tagging BAK1 interfered with its activity. Perakki et al. instead tagged the FLS2 and EFR co-receptors and purified the complex, and then identified where the co-purified BAK1 proteins were phosphorylated (they also minimized BR-mediated phosphorylation by pre-treating with a BR-synthesis inhibitor). The authors identified several Ser, Thr and Tyr residues that are phosphorylated when BAK1 associates with FLS2 or EFR; replacing these with non-phosphorylatable Ala blocks immune signaling. One particular Tyr, Y403 in BAK1, is conserved amongst some but not all LRR-RKs and their co-receptors, this revealing a phosphocode that distinguishes two classes of LRR-RKs. (Summary by Mary Williams) Nature 10.1038/s41586-018-0471-x

Phosphocode-dependent functional dichotomy of a common co-receptor in plant...
Scroll to top