Precise trafficking of proteins to their proper destinations in the cell, whether to an organelle, a membrane, or the cytoplasm, is required for optimal cellular function. Because most plastid proteins are nucleus-encoded and translated in the cytoplasm, proper targeting and import relies on the presence of specific N-terminal transit peptide sequences. But what signals direct a particular preprotein to a certain type of plastid? An N-terminal domain containing multiple Arg and hydrophobic residues was identified as a mitochondrial specificity factor (Lee et al., 2019), and consecutive positively charged (twin-positive) residues were shown to be important for preprotein import into old vs. young chloroplasts (Teng et al., 2012). 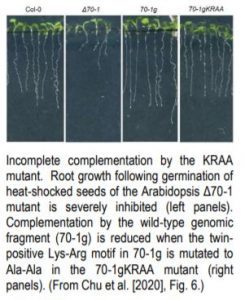 Recent work by Chu et al. (2020) reveals particular transit peptide motifs that confer tissue-specific import of preproteins into leucoplasts vs. chloroplasts. Using an in vitro system they have optimized for analyzing protein import into pea root leucoplasts, the authors compared the import efficiency of the homologous preproteins of plastoglobulin 35 (prPGL35) and fibrillin 1B (prFB) into leucoplasts vs. chloroplasts. Both proteins were imported equally well into chloroplasts, but prFB was more efficiently imported into leucoplasts. By replacing regions of the prPGL35 transit peptide with corresponding sequences from prFB, they found two regions of prFB that improved import of prPGL35 into leucoplasts by more than two-fold: an Arg-Val-Ser-Ile (RVSI) sequence at positions 15-18 and an Arg-Val (RV) sequence at positions 53-54. Mutation of either the RVSI sequence to 4x Ala or the RV sequence to 2x Glu severely reduced prFB import into leucoplasts, but had minimal effect on chloroplast import.

Chloroplast cpHsc70-1, a heat-shock protein important for plastid biogenesis and protein import into plastids in both roots and shoots, has a single twin-positive motif (Lys-Arg) in its transit peptide. When heat-shocked seeds were germinated on MS medium, deletion mutants lacking cpHsc70-1 (Δ70-1) produced severely stunted leaves and roots compared to Col-0 (see figure, left two panels). When the cpHsc70-1 twin-positive residues in a genomic fragment (70-1g) that restored normal root and leaf growth were mutated to Ala (70-1gKRAA), import into leucoplasts, but not chloroplasts, was severely reduced, and root growth was significantly inhibited (right two panels). 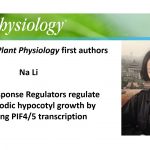 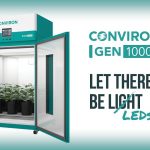