Isoprenoids are a huge group of compounds that include primary metabolites such as carotenoids, chlorophylls, and hormones, as well as a plethora of specialized secondary metabolites. In addition to their importance in the physiology of plants (and of other kingdoms of life), isoprenoids have drawn attention in recent years for their applications in human health (reviewed in Kirby and Keasling, 2009). Isoprenoids are produced from two common 5-carbon isomers, isopentenyl diphosphate (IPP) and dimethylallyl diphosphate (DMAPP; reviewed in Vranová et al., 2013) that serve as the building blocks for isoprenoids. The polyisoprenoids dolichol and polyprenol comprise a class of long, linear isoprenoids greater of 45 carbons or greater (see Figure). Whereas dolichols are well known for being essential in N-glycosylation, the functions of plastid-localized polyprenols are less clear (reviewed in Surmacz and Swiezewska, 2011). New work from Akhtar et al. (2017) exploring the biosynthesis of polyprenols in plants indicates that they could be important in thylakoid membrane dynamics.

A two-component complex required for dolichol synthesis (Brasher et al. 2015) in plants includes a cis-prenyltranferase (CPT), prompting Akhtar and coworkers to search among the nine Arabidopsis thaliana CPTs for those expressed in green tissue—where polyprenols are known to accumulate—and phylogenetically distinct from the CPT that produces dolichol. These criteria led the authors to CPT7 as a candidate for polyprenol biosynthesis.

Akhtar et al. found that wild-type leaves contained medium-chain polyprenols, composed of 9–11 isoprenoid units (45–55 carbons), mostly as free alcohols. By contrast, a homozygous cpt7 T-DNA mutant was missing these classes of polyprenols and CPT7 RNAi lines were decreased for them, whereas CPT7 overexpressors had markedly increased or at least wild-type levels. Further, recombinant CPT7 was active in adding IPP units to all three tested intermediate substrates, with a strong preference for farnesyl diphosphate (FPP) and geranylgeranyl diphosphate (GGPP). 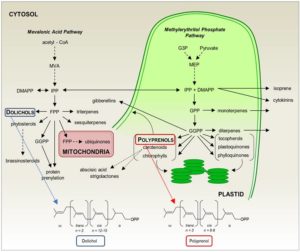 As FPP and GGDP are produced in different locations within the cell (see Figure), Akhtar and coauthors characterized the subcellular localization of CPT7. A combination of immunodetection and in vivo localization of fluorescent protein fusions revealed CPT7 in the stromal fraction, where most of the medium-chain CPT activity in the chloroplast resides. Thus, it appears that CPT7 functions as the primary enzyme for stromal polyprenol biosynthesis.

However, polyprenols are quite hydrophobic, and Akhtar et al. reasoned that they are unlikely to accumulate in the aqueous environment of chloroplast stroma, despite the stromal localization of CPT7. Indeed, polyprenols were present mainly in the thylakoid membrane fraction of wild type chloroplasts. Consistent with this localization, the CPT7 RNAi and CPT7 overexpression lines had lower and higher levels, respectively, of medium-chain polyprenols in the thylakoid fractions.

Akhtar et al. took advantage of these lines to address the possible roles of polyprenols in the thylakoid membrane. In artificial membranes, polyprenols are reported to increase membrane fluidity. In the protein-dense thylakoid membranes, however, fluorescence anisotropy analysis revealed that the lines with less polyprenol had greater membrane fluidity. These lines also had lower photosystem II operating efficiency, due to a lower rate of electron transport. These analyses thus suggest that medium-chain polyprenols—produced by CPT7—help determine the biophysical characteristics of thylakoid membranes by restricting fluidity, with important consequences to photosynthetic performance.

BEN, ROB, and the Making of a Petunia Flower
Scroll to top