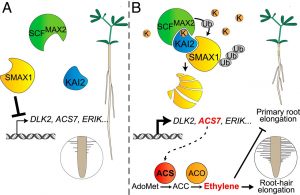 KARRIKIN INSENSITIVE 2 (KAI2) and MORE AXILLARY GROWTH 2 (MAX2) form an important hormone receptor complex and mediate several developmental responses in the karrikin signaling pathway. The proteolytic degradation of the suppressor of MAX2 (SMAX1) is a major step in this pathway. Carbonnel et al. investigated the molecular events downstream of SMAX1 and the associated developmental responses in Lotus japonicus. Using a phylogenetic approach, the authors identified SMAX1 in L. japonicus and subsequently confirmed it as a proteolytic target of the karrikin receptor complex. Retrotransposon mutants of smax1 displayed a strong reduction in primary root growth and elongated root hairs compared to the wild type. Addition of sugar and increased phosphate levels in the growth medium did not change the phenotype, suggesting that the observed phenotype is not caused by inadequate seed reserves nor hypersensitivity to low phosphate. The transcript of ACS7, an ethylene biosynthesis gene, was significantly increased in smax1 mutants, suggesting that ethylene might play a role in the root phenotype. Indeed, the changes in root architecture observed in smax1 were caused by an increase in ethylene biosynthesis. The authors also confirmed that ACS7 is required for root hair growth in Arabidopsis, corroborating their earlier study that smax1 smxl2 double mutants show increased root hair in Arabidopsis. Taken together, the study revealed a connection between karrikin and ethylene signaling and how this regulates root and root hair development in L. japonicus seedling.(Summary by Toluwase Olukayode @toluxylic)  Proc. Natl. Acad. Sci. USA 10.1073/pnas.2006111117 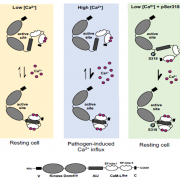 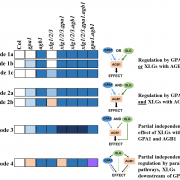 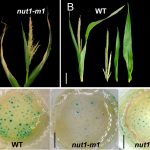 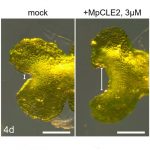