Background: The oxidative pentose-phosphate pathway (OPPP) is found in all multicellular organisms. In plants, this pathway is essential due to reactions shared with photosynthesis (the Calvin cycle in the plastid stroma), but it mainly operates at night. The OPPP produces energy in the form of NADPH and ribulose-5-phosphate, an important precursor of nucleotides that uses glucose-6-phosphate (G6P) as a substrate. In non-green tissues of Arabidopsis thaliana, G6P is imported into plastids from the cytosol by two membrane proteins, GPT1 and GPT2. Since the first three steps in the OPPP are sometimes also found in another organelle, the peroxisome, it was unclear how the substrate (and which product) of the OPPP may be transported across the peroxisomal membrane.

Question: We asked whether GPT1 (or GPT2) might also occur at peroxisomes, in addition to the known location at plastids. Specifically, how is a protein directed to two different locations in a single cell? We already studied how other OPPP enzymes may be diverted from plastids to peroxisomes.

Findings: The GPT1 transporter of Arabidopsis targets both plastids and the endoplasmic reticulum (ER), from which new peroxisomes are formed. Apparently, a yet unknown factor prevents GPT1’s transfer from the ER to peroxisomes until the protein is needed at this location. However, by forcing interaction with peroxisomal import proteins at the ER (Pex3 and Pex16), we showed that GPT1 could be dragged to this destination. Hence, with GPT1 being directed to peroxisomal membranes, we can now explain how OPPP reactions inside peroxisomes are supplied with substrate (G6P) and which product (ribulose-5-phosphate) leaves the organelle. This appears to be highly important during fertilization. In this respect, GPT2 is different from GPT1, as also shown in Arabidopsis gpt1 mutants, although this was not expected.

Next steps: Since all three OPPP reactions (that produce NADPH and ribulose-5-phosphate) operate in peroxisomes, we are now interested in finding out which other processes also require the OPPP. The OPPP is not the only source for NADPH inside peroxisomes; still, if this pathway is blocked, plants may be less stress resistant. 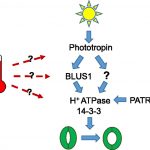