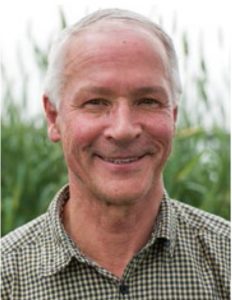 Richard Richards’s research interests are to understand the genetic and physiological basis of variation in growth, development,  and yield of wheat, and then to apply this understanding to breed higher-yielding wheats— particularly in water-limited environments. This research has resulted in more than 200 refereed scientific publications. In addition, nine wheat cultivars developed by Richard and his group have been released commercially in Australia in the past decade. He is also interested in understanding how breeding and crop management intersect to lead to improved yields. Richard has been principal scientist for the wheat breeding company Advantage Wheats Pty Ltd. In this role, he works closely with industry to ensure adoption of suitable varieties. Richard is an adjunct professor with the University of Western Australia and an elected member of the Australian Academy of Science and the Australian Academy of Technological Sciences and Engineering. He was recently awarded the Rank Prize in London, shared with Graham Farquhar for their work on carbon isotope composition in plants and its use in improving water use efficiency.

What got you interested in plant biology in general, and what influences directed you to your specific area of research?

As a young child I lived on the fringe of a country town surrounded by nature. This provided a seemingly endless playground to explore. I was also lucky to have parents that gave me a long leash to explore this nature-filled playground. My parents also had a productive vegetable garden and chooks [an Australian slang word for chickens], and this gave me an insight and interest in food production and seasonality. I can trace early childhood explorations into genetics by selective breeding of budgerigars, pigeons, and mice, which gave me a fascination of genetics and a challenge to understand genetic variability. Further on, by studying racehorse pedigrees, I started to understand that genetics was only part of the picture and that actual performance was hugely influenced by how a horse is managed, and so the genotype (G), environment (E), and management (M) are all important. Understanding G × E × M is pivotal to understanding crop production.

I went on to study biology at Melbourne University and gravitated to plant biology and genetics rather than animals. Despite the semirural childhood, where raising chooks and preparing them to eat or catching rabbits to eat was standard, I became squeamish later on, and so studying plants was the default. In searching for an honors supervisor, I was fortunate to find Noel Thurling, who shared my interest in plant physiology, ecology, and genetics. I moved briefly to LaTrobe University under his supervision. A year later, Noel accepted a position in the agriculture faculty at the University of Western Australia, and I followed him. I have been hooked on agriculture ever since.

If you had six months off, what would you do with your time?

What a luxury that would be! Three things come to mind. First, more time with my three very young grandchildren. I find them endlessly fascinating. They are so full of fun and energy and are uninhibited, inquisitive, and wonderful to be with. Second, travel with my wife would feature large. I would travel back to the many wonderful places around the world that my career has taken me, but do so in a more leisurely way, and also travel to new places. I would also like to spend an extended period working as a volunteer in a small rural village in a developing country. Travel to inland Australia and other parts of Australia would also be high on the agenda. Third, get back to basics with clay and pottery, which kept me sane during my PhD, and start dabbling in painting. Australian indigenous artists have provided a whole new way of looking at landscapes, and this is a space I would like to explore.

Who influenced your scientific thinking early in your career, and how?

The interface between plant/crop physiology and genetics and then harnessing this through breeding and agronomy to improve food crops is what I am drawn to. My honors and PhD supervisor, Noel Thurling, introduced me to some of this. Other luminaries that have had a major influence on me are John Passioura and Tony Fischer, both at CSIRO, who provided a framework to think about crop improvement and hence sharpened and harnessed my research focus. Having a framework is so important to identify dead ends and, conversely, to work on the most important science questions that will make a lasting difference. Graham Farquhar is another luminary who opened up more fundamental areas of science to me. The last three have demonstrated to me the importance of probing deeper into a problem and in fact asking the big questions that get to the nub of an issue. It is so crucial to target areas of high impact; otherwise, we squander our intellectual abilities.

What do you think are good career moves for young scientists, and why?

Finding the best team to work in or with is vital. Good teams have energy, intellectual rigor, and ideas and attract collaborators. Collaborating and working in new environments are also important to expand your knowledge/experience base.

We tend to work in a discipline we have expertise in and where we are comfortable. At all career stages, we must understand the layer below us (a more fundamental one) and a layer above us (a more applied or complex one). Thus, if we are working at a single plant level, we should aim to understand what is happening at a cellular/molecular level and also the crop level. This gives us entry into more fundamental science and entry into the application of our science. These are important, as they are likely to have a greater impact on what we do and an ability to engage with other people with different skills so that we are always learning.

I am a strong advocate for having a small side project—one that the boss does not know about! We have to be courageous in science and take risks if we are to move forward. Often we make an observation that suggests something else is important that we are not investigating, as it is not one of the milestones we have to report on. Making small investigations into these whims may lead to a whole new area of investigation in the future. Thus, having a hobby project is useful as long as you are confident it makes some sense and you have a very good reason for doing it. This means talking it over with trusted colleagues first to make sure you are not going down some crazy route.

What scientific discoveries over the past couple of years have influenced your research directions, and why/how?

The greatest recent influence on my research direction has been the recognition that we may be reaching a physiological limit for yield in our major food crops. At the same time, we recognize that global demand for food, fiber, and fuel from plants will continue to grow and is not going to plateau until about 2050. This is occurring when land for food production is declining, water resources for agriculture are declining, and climate change is lurking with unknown, but almost certainly negative, impact on food production. We have a global crisis.

It is also important to recognize that major scientific discoveries in plant science can take about 15 years, under the most optimistic circumstances, to be adopted by industry. This makes our work very urgent. It also makes us focus on research directions that are going to be most important if we are to somehow avert the crisis ahead.

What do you think is the next big thing in plant biology, and why?

The above thinking leads me to two major challenges in plant biology: improving photosynthesis and improving root systems and fitting these into sustainable agricultural systems where they will be expressed. It is extraordinary that 100 years of intensive breeding has had little impact on the rate of photosynthesis in almost all crops. Total photosynthesis has increased through longer crop duration, faster leaf area development, and canopy architecture but not through changes in photosynthesis at the leaf level. I believe we still have significant opportunities to improve photosynthesis by changing canopy architecture and leaf duration in the short term, and then through changing the photosynthetic pathway in the long term. Altering root systems so they capture more water and nutrients is also a big and difficult target that requires more research attention.

My “next big things” are, of course, based on my interests. Plant biology is a vast playing field, so there are any big things to work on.

As an employer, what are the five key qualities you look for in a potential team member?

Passion to probe and question, team spirit, communication, courage, hands-on, observant, initiative. Having any five of these qualities should result in being a great team member.

That you have chosen well and this can be an incredible journey. But, it carries with it some responsibility. You can make a real difference, and the world is going to rely on young people such as yourself. Changing climate; declining water resources; increasing demand for food, fuel, and fiber; and sustainable land management are going to need science-based solutions. There are many ways you can make a difference and all are important. Inspiring the young about science as a teacher is so critical. I am in awe of teachers like this, and they deserve far more attention than they currently receive and need more accolades. Plant research, of course, is also critical, if you think this is your calling. The important period plant scientists have ever faced. Take up scientific arms, think broadly, question, work on the big issues that really interest you, work with the best people, and then enjoy the ride. It can be exhilarating.

What experience or training do you think it is most important to have?

Three things come to mind. What you like doing and are good at comes naturally. So you need to look beyond this for effective experience and training. First, training and experience in new tools and techniques that enhance your ability to extend your research are important. Second, experience in labs with related yet different interests to your own are always illuminating, and we tend to be more receptive to learning from these experiences. Third, to make an impact we have to communicate our ideas in simple terms. Many scientists struggle with this, often because they are so passionate about what they do and so they want to tell everything in great detail. This is often totally ineffective except to other scientists working in the same area. Observing the best communicators and the techniques they use to sell their messages will help you learn how to communicate effectively.

What is the single most important factor for a successful career in plant biology?

The fire in your belly to make a difference. If you have this, then you are well on your way to having a successful career.