Current Position: Editor for chemistry and biology at the publishing house C.C.Buchner, Germany

Brief Bio: Before becoming an editor for textbooks, I was a PhD student and later a Postdoc in the research groups of Benedikt Kost (Cell Biology, Erlangen) and Petra Dietrich (Molecular Plant Physiology, Erlangen). One focus of my research was the investigation of biophysical processes during polar cell growth. My supervisor, Jan Dettmer, put me in contact with Ben Fabry’s group for biophysics in Erlangen, to study the mechanical guidance mechanisms during pollen tube growth together. We discovered that the reactions of pollen tubes to obstacles of different stiffness depend on the style architecture of the plant species. More specifically, we found that pollen tubes from plant species with solid transmission tracts have a higher growth rate in a stiffer matrix. For this project, I also collaborated with Anja Geitmann and her group at McGill University in Montreal. She coined the term “durotropism” to describe the effect we observed.

KETCHing up with gametogenesis: nucleocytoplasmic import and cell cycle con... 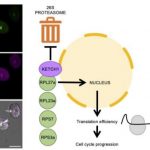 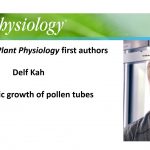