Recently, we’ve been profiling first authors of Plant Cell papers that are selected for In Brief summaries. Here are the first-author profiles from the October issue of The Plant Cell.

Current Position: Assistant Professor in the Faculty of Agricultural and Environmental Science at McGill University.

During my PhD at the University of Toronto, I became interested in the ways in which plants integrate multiple, simultaneous environmental signals into adaptive functional responses. As a postdoc at New York University, I worked in a collaborative team studying gene regulatory networks. Now as I start my own group at McGill University, I am bringing these areas of study together to build a plant systems biology research program.

During my undergrad and MS at Freie Universität Berlin, Germany, I became interested in modeling gene expression time course data for classification of drug treatment responses. Later during my PhD, I wanted to gain a mechanistic understanding of transcriptional dynamics by combining information about transcription factor binding motifs and DNA accessibility with large-scale expression time series.

I was first attracted by the beautiful green color of chlorophyll, which plays a central role in photosynthesis. In particular, I got interested in the regulation of chlorophyll metabolism by plant hormones during my Master’s course at Tottori University. After completing my Master’s course, I joined the group of Prof. Ayumi Tanaka at Hokkaido University working on chlorophyll metabolism as a PhD student. At that time, most of the enzymes involved in chlorophyll degradation had been identified except for the magnesium (Mg)-dechelatase that catalyzes the initial step of chlorophyll degradation, which is the removal of Mg from chlorophyll. Using genetics and biochemical methods, we identified the Mg-dechelatase, as described in this paper. We found that the Mg-dechelatase is encoded by the STAY-GREEN gene, which is alternatively known as Mendel’s green cotyledon gene. Interestingly, we also found that Mg-dechelatase regulates the degradation of photosystems. This finding highlights the smart strategy of plants that prevents the formation of free and toxic chlorophyll derivatives by the coordinated degradation of chlorophyll and photosystems.

Mareike Hauenstein, featured first author of A role for TIC55 as a hydroxylase of phyllobilins, the products of chlorophyll breakdown during plant senescence

Current Position: PhD student in the group of Prof. Dr. Stefan Hörtensteiner at the Department of Plant and Microbial Biology at the University of Zurich.

During my Bachelor’s studies I got the opportunity to participate in a practical course in Prof. Dr. Stefan Hörtensteiner’s group. The comprehensive topic of his group is the pathway of chlorophyll breakdown. An ubiquitous process that all of us can observe by eye in our everyday life, chlorophyll breakdown causes the change of leaf color in fall and the color change of ripening fruits. I learned that this was a crucial step for the plant in order to protect itself from oxidative damage during nutrient recycling and that it requires an array of consecutively acting enzymes. I found it fascinating to ask how we can use compound analysis, biochemical and genetic tools to understand these processes at the molecular level. Each member of the group was focusing on a distinct part of the pathway, on the pathway in different species, or on its regulation. When I decided to join this group for my Master’s thesis project, I started working on the identification of the enzyme responsible for the common side-chain modification, the hydroxylation of the C32 of chlorophyll catabolites. During my Master’s and the beginning of my PhD we were finally able to assign this function to TIC55. It was fun adding another piece to the puzzle of chlorophyll catabolism. Since little is known about the physiological function of the side chain modifications, I hope that I can further contribute to solving this fascinating puzzle.

Non-scientific Interests: Reading, travelling and being a mother.

Soon after completion of my PhD studies, I attended a workshop in Glycosciences in Grenoble through which I came in contact with Prof. Breton. She then offered me the opportunity to work as a Post-Doc at the Structural and Molecular Glycobiology at CERMAV, a research center focused in Glycosciences, covering all carbohydrate related areas, from their synthesis to potential industrial/medical applications. This was my first contact with plant glycosyltransferases and with xyloglucan biosynthetic pathway. In the last years, xyloglucan has attracted much attention for its many industrial applications. Structural characterization of the enzymes involved in xyloglucan production, such as FUT1, allows a better understanding of their function and interaction with their substrates, providing an opportunity to manipulate and modify this polymer, improving its performance and ultimately, leading to novel industrial/medical applications.

Current Position: Postdoctoral Researcher in the Chemistry and Biology of Oligosaccharides team at the CERMAV Institute in Grenoble (France).

Biology has always been my favorite subject at school and university. Being curious and outdoorsy, I started my study in environmental science, to protect what I like the most! I took some courses on bioremediation and bioengineering during my undergraduate studies. This is how I began to realize that the subject I was most interested in could benefit society. I then decided to pursue my studies in molecular and cellular biology. I chose to do my PhD on the characterization of glycosyltransferases that synthesize plant cell wall polysaccharides because (i) there are still many sequences, especially those related to plants cell wall synthesis, which are not yet well characterized. Notably, the fact that no plant cell wall glycosyltransferase structure was yet recorded in databases made the challenge even more attractive! (ii) The xyloglucan fucosyltransferase AtFUT1 was of particular interest since xyloglucan is already intensively studied, both for its utilization as a biomaterial and for modifying plant cell wall properties. (iii) Glycosyltransferases are ubiquitous to living organisms and are used in numerous biotechnological applications. For instance, fucosyltransferases are promising tools for the synthesis of oligosaccharides and glycoconjugates, which is of interest in medicine. (iv) Finally, we still hardly understand how hemicelluoses are being synthesized within the cell. I have found it exciting to be involved in shedding light on some aspects of these mechanisms, and I hope new biochemical and structural data will soon unravel the process of xyloglucan biosynthesis.

When I was a graduate student, I studied micro RNA-directed post-transcriptional regulation in the lab of Yuke He, stimulating my interest in RNA biology. As a post-doc in the Brian Gregory Lab, I am learning many new cutting-edge scientific concepts, ideas, and tools from a variety of my research projects. Our research focuses on many aspects of RNA biology including RNA degradation, RNA secondary structure, RNA-binding protein-RNA interactions, and RNA modifications. As a post-doc, Brian developed a very important technique known as genome-wide mapping of uncapped and cleaved tran-scripts (GMUCT), and this technique was updated recently by my collaborator Dr. Matthew R. Willmann. Inspired by recent work in yeast, we decided to survey whether co-translational RNA decay also occurs in a plant transcriptome, using numerous GMUCT datasets for Arabidopsis thaliana. To do this, we developed customized analysis pipelines, and observed clear evidence for co-translational RNA decay. First, we found that free 5′ RNA ends, representing truncated RNA molecules, accumulate at the ribosome boundary site at the stop codon of mRNA open reading frames. We also showed a 3-nucleotide periodicity throughout these open reading frames. Next, we found that the exoribonuclease XRN4 and the mRNA cap-binding protein ABH1, which function in RNA decay, also function in this process. In cells, recent evidence has demonstrated that many linked molecular events are coupled with each other. A well known example is co-transcriptional splicing, in which gene transcription and pre-mRNA processing are closely coupled. Therefore, it is not unexpected that RNA decay is coupled with translation. As compared to canonical RNA decay, which involves ribosome-free RNAs, mRNA turnover by co-translational RNA decay seems to be more efficient and faster, and this is likely important for plants to rapidly respond to changing environmental stimuli.

I have been interested in and have studied the regulation of gene expression since I was a graduate student in Jen Sheen’s lab. At that time, my research focused on transcriptional control of responses to flagellin in Arabidopsis. When I moved to Scott Poethig’s lab at the University of Pennsylvania as a postdoctoral fellow, his lab was studying trans-acting silencing RNAs and micro RNAs and their ability to control developmental transitions. As a result, my focus switched from transcriptional to post-transcriptional regulation of gene expression. During my time in Scott’s lab, I performed a microarray study in collaboration with another postdoc. I became fascinated because some of the most highly up-regulated genes at the RNA level showed no change in expression at the protein level. This finding suggested regulation at the level of translation or protein stability or degradation. Although we did not pursue the question further, I was left with a great interest in studying translational control of gene ex-pression. When I joined Brian Gregory’s lab as a research associate, in addition to my other projects, he allowed me to follow this passion. I began by developing a protocol for ribosome profiling in plants, and then, when another group showed co-translational decapping and 5′-to-3′ exonucleolytic decay in yeast, we decided to try using genome-wide mapping of uncapped and cleaved transcripts as an alternative method for studying translation in plants, leading to the current study. Although I do not study translational control in my current position, my time investigating it in Brian’s lab was a highlight of my research career I will always be grateful for.

When I was a high school student, I thought that it would be exciting if I could integrate my two interests, biology and computers. After graduating from National Taiwan Ocean University, I joined Dr. Ho-Ming Chen’s Lab in Academia Sinica as a research assistant and worked on analysis of next-generation sequencing data. Although I had no prior experience with bioinformatics, under the guidance of Dr. Chen, I quickly developed the skills for mining, visualization and interpretation of next-generation sequencing data. Our work revealed that truncated RNA molecules could be footprints of RNA binding proteins (Hou et al., BMC Genomics, 2014). Because ribosomes represent a large proportion of RNA binding proteins, we thought that these truncated RNAs could also be ribosome-protected fragments and may reflect ribosome dynamics on a genome-wide scale. In our current work, we found 30-nt phased signatures of truncated RNA ends representing the footprints of stacked ribosomes in upstream open reading frames, coding sequences, and the region upstream of the non-cleavable binding sites of AGO7. These findings expand the applications of RNA degradome data to ribosome stalling. As I look back, this work also paves the way towards my career in bioinformatics, which is fulfilling my dream of answering biological questions with computers. 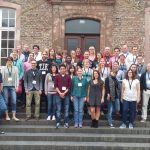