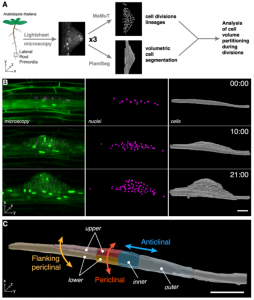 Lateral roots continually form and develop out of the primary root throughout the plant’s lifetime, enabling the root system to optimize its development to its environment. In this study, Schütz et al. used light-sheet microscopy to generate 4D movies of Arabidopsis lateral root primordia expressing markers to label the plasma membranes and nuclei. The images were analyzed to track nuclei and cell divisions (using the MaMuT pipeline) as well as cell shapes and volumes (using the PlantSeg pipeline), giving the authors a detailed look at the earliest stages of lateral root development. As described previously, the process begins with anticlinal divisions (perpendicular to the axis of the root) followed by periclinal divisions (parallel to the root axis and the circumferential plane). This detailed analysis revealed consistent asymmetry within the divisions and intense cell growth preceding periclinal divisions. The results indicate that “cells integrate growth and division to precisely partition their volume upon division during the first two stages of lateral root formation”. (Summary by Benjamin Jin) bioRxiv 10.1101/2020.12.15.422941 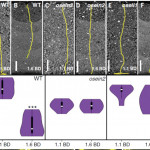 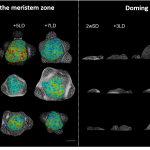