Magnaporthe oryzae (rice blast fungus) is a hemibiotrophic fungal pathogen that causes major losses to rice harvests. Co-evolution of M. oryzae with rice has led to the development of diverse resistance (R) genes in rice that mediate the detection of diverse effector proteins produced by the fungus. In compatible interactions, in the absence of recognition by a resistance protein, the effectors suppress immune responses, including ROS production, and M. oryzae successfully invades rice cells. 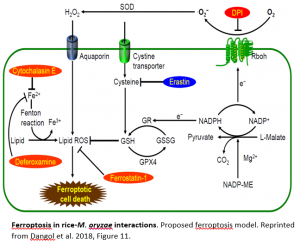 Future research on the role of this iron-dependent form of cell death will show how widespread ferroptosis is in plants. Rice–M. oryzae is the first plant pathosystem in which ferroptosis was detected. However, the accumulation of iron in response to powdery mildew was described in various monocots (Liu et al. 2007), suggesting that pathogen-induced ferroptosis is probably not restricted to rice.