The contractile actomyosin ring (CAR) would be familiar to most students of cell biology. It is often assigned a major role in the formation of the cleavage furrow that bisects the cell during cytokinesis.  The contractile force of the ring is generated by type-II myosin motor proteins pulling on actin filaments. However, although division by cleavage furrow formation is widespread among eukaryotes and likely represents the ancestral state, type-II myosins, which are key to the CAR model, are almost exclusive to animals, yeasts and their close relatives. This observation has raised questions about how non-animal/yeast organisms form a furrow, and about the role of actin in myosin-II-less division. Onishi et. al explored these questions in the green alga Chlamydomonas, a representative organism that divides by forming a cleavage furrow but does not encode any type-II myosin. Although filamentous actin was found associated with the cleavage furrow, depletion of actin was entirely compatible with furrow formation, although the speed of furrow ingression was slowed down compared to the wild type. Curiously, the delay was most noticeable when the actin-less furrow encountered the chloroplast, indicating a strong requirement for actin in coordination between cell and chloroplast division. In the absence of actin, cleavage relies largely on microtubules. Identifying how microtubules drive furrow formation in Chlamydomonas is sure to provide interesting new insights into mechanisms and evolution of eukaryotic cytokinesis.  (Summary by Frej Tulin @FrejTulin) Proc. Natl. Acad. Sci. USA 10.1073/pnas.1920337117

A new node in mediating crosstalk between the proteasomal and autophagic degradation... 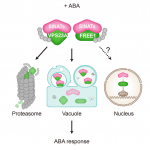 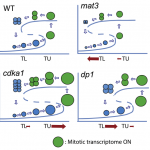