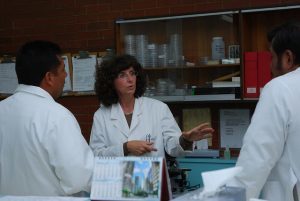 “A curiosity for disease and a passion to cure led Mezzalama to a career as a plant pathologist. While studying for an undergraduate degree in agronomy in her hometown of Turin, Italy, she visited nearby vineyards to study plant pathogens for the first time.

“It was working in the vineyards where I first saw plant pathogens at work and where I saw the impact they have on farmers, and what it means for their livelihoods,” she said.

After graduating in 1986, Mezzalama began her first job at CIMMYT working alongside virologist Peter Burnett on a project dedicated to barley yellow dwarf (BYD) virus, which effects barley, wheat, maize, rice and other grasses worldwide. The experience opened her mind to a new world where she learned the inner workings of plant pathogens and started to study for a doctoral degree in plant pathology in Italy.” … Read More