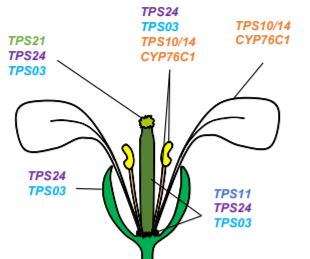 However, some plants do not cross-pollinate and depend less on VOCs. Flowers are fragile structures with fewer physical barriers than other plant tissues, which can make them targets for pathogens and florivores. In outcrossing plants, this vulnerability is compensated by successful reproduction. However, self-pollinating plants have a fitness advantage in balancing VOC release with defense.

Arabidopsis thaliana is a good model to research how self-pollinated plants reduce VOCs. Arabidopsis flowers emit a complex but weak blend of terpenoid volatiles. Flowers were shown to express 20 terpene synthases (TPSs), but the role of these genes was unclear until recently. One hypothesis was that TPS gene expression was a vestigial trait (Chen et al., 2003). 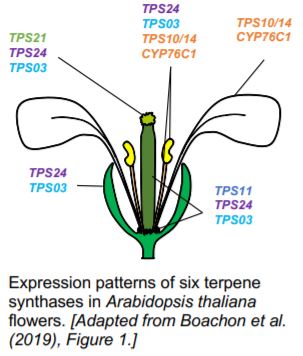 Multifunctional cytochrome P450 enzymes (CYPs) with low substrate specificity reduce the volatility of terpenes in Arabidopsis flowers. Boachon et al. (2015) showed that CYP76C1, a monoterpene oxidase, oxidizes linalool enantiomers produced by TPS10 and TPS14 into lilac compounds. In their most recent paper, Boachon et al. (2019) highlighted the role of CYP706A3 in the oxidation of VOCs. CYP706A3 clusters with TPS11 on chromosome 5 and the two genes are co-expressed. However, CYP706A3 does not oxidize only the sesquiterpenes produced by TPS11. CYP706A3 also accepts (E)-β-caryophyllene and various monoterpenes as substrates. Overall, CYP706A3 and CYP76C1 reduce the volatility of the compounds synthesized by TPS10, TPS11, TPS14, TPS21, and TPS24 (Figure). Other CYP enzymes may also contribute to these oxidations in cascade (Ginglinger et al., 2013).

Both Boachon et al. (2015) and Boachon et al. (2019) show the benefits of this strategy associated with self-pollination. Linalool attracts thrips and hoverflies. Instead, lilac compounds reduce these visits and the resulting damage by three other feeding insects (Boachon et al., 2015). Similarly, sesquiterpenes produced by TPS11 attract hoverflies while their oxidized derivatives repel them. As the expression of TPS11 and CYP706A3 start early in flower development, Boachon et al. (2019) further tested the feeding behavior of Plutella xylostella caterpillars and showed that they avoided floral buds with oxidized terpenes. Finally, microbiome analyses suggest that flowers emitting a blend of VOCs may host different bacterial communities than flowers accumulating non-volatile terpenes. 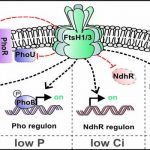 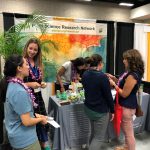 Plantae Internships and conference updates from the PSRN
Scroll to top