Background: When one thinks of hydrogen peroxide (H2O2), the first thing that comes to mind is its use as a bleaching agent and disinfectant, because H2O2 can easily oxidize other molecules. In fact, H2O2 is constantly produced in living cells, often as a byproduct of biological processes, but also sometimes intentionally, e.g., to kill pathogens. Furthermore, H2O2 is thought to play a role as a signaling molecule, just like calcium. Thus, to find out the biological functions of H2O2, it is important to understand when and where it is produced in the cell and how and where it is distributed.

Question: To understand the role of H2O2 in plant cells, we needed a sensitive H2O2 sensor that can be used to track its formation and distribution in living cells. Our goal was to develop such a sensor for plant cells. 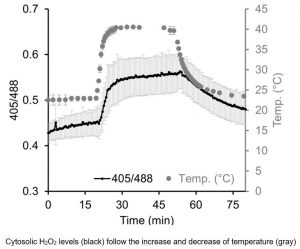 Findings: We developed a hypersensitive H2O2 sensor for the unicellular green alga Chlamydomonas reinhardtii. This sensor was recently established for yeast and is based on a variant of the green fluorescent protein, called roGFP2, coupled to a peroxidase. The peroxidase is very efficiently oxidized by H2O2 and subsequently oxidizes roGFP2. The oxidation of roGFP2 leads to a slight change in its fluorescence properties based on which changes in H2O2 concentrations in the living cell can be reported. We were able to direct the sensor into six compartments of a Chlamydomonas cell, allowing us to monitor the generation and distribution of H2O2 in cells exposed to high light or heat stress. We found that H2O2 generated in one compartment under physiological conditions can enter neighboring compartments. However, further diffusion of H2O2 appears to be limited by its efficient degradation.

Next steps: The next step is the targeted manipulation of H2O2 concentrations in individual compartments. For this goal, enzymes that degrade or produce H2O2 need to be eliminated or introduced. The success of these manipulations can be monitored by our sensors. Subsequently, the effects of such manipulations on cellular processes can be studied. 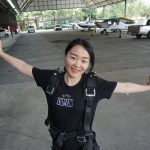 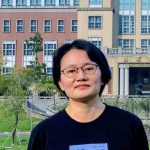