Yu et al. find a hemicellulose that has similar function, structure, and biosynthesis to the well-studied hemicellulose xyloglucan

Background: Plant primary cell walls need to be rigid enough to define the plant shape and yet allow cell expansion at the same time. Plants achieve this by forming a complex network that is composed of cellulose and various non-cellulosic polysaccharides, such as hemicelluloses. Cell walls differ in the abundance of the various hemicelluloses, and their roles are poorly understood. In contrast to xyloglucan, which has been the most extensively studied hemicellulose in the primary cell walls, neither the structure nor functions of glucomannan has been resolved.

Question: Are the functions of the glucomannan in primary cell walls distinct from the roles of the most abundant hemicellulose, xyloglucan? 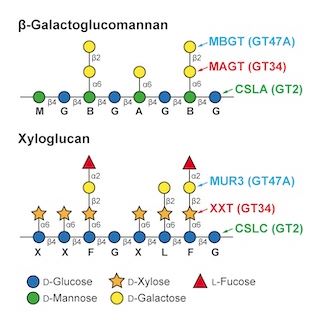 Findings: We discovered a type of glucomannan in eudicot primary cell walls, which we named β-galactoglucomannan (β-GGM) because of its distinctive structures: disaccharide side chains of β-Gal-α-Gal and alternating repeats of Glc-Man in the backbone. Similarity to xyloglucan in structure and biosynthesis led us to identify a β-galactosyltransferase for the β-GGM biosynthesis. We found that β-GGM contributed to normal cell expansion, in a way that was masked by the presence of xyloglucan. These results suggest related functions of β-GGM to xyloglucan, highlighting the necessity to consider the contribution of multiple hemicelluloses in the functional study of plant cell walls.

Next steps: We would like to know how β-GGM binds to cellulose, and how this differs to cellulose binding of xyloglucan. Investigation of the precise arrangements and interactions of cellulose and hemicelluloses including β-GGM and xyloglucan will help further understanding of the enigmatic functions of hemicelluloses. 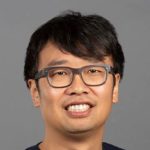 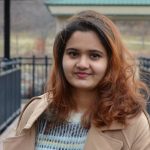