Yang et al. study the role of the SMC5/6 complex during reproductive development in Arabidopsis.

By Ales Pecinka a, Fen Yang a, Nadia Fernández-Jiménez b and Mónica Pradillo b

Background: Plant sexual reproduction is an intricate affair. First, the number of chromosomes from the diploid plant is reduced by half (in haploid gametes) via meiosis, and later the gametes fuse in the process of double fertilization, which gives rise to seeds containing a diploid embryo and a triploid (meaning three chromosome sets) nourishing tissue, the endosperm. Although we know that this process is strictly regulated, the exact roles and functions of the many molecular factors involved remain unknown. The key factor affecting plant fertility is the Structural Maintenance of Chromosomes (SMC) 5/6 complex, which is involved in safeguarding genome stability.

Question: We wanted to understand why mutants in the SMC5/6 complex often develop abnormal seeds. We studied this question by analyzing male and female reproductive development in the mutants using genetic, molecular, and cytology methods. 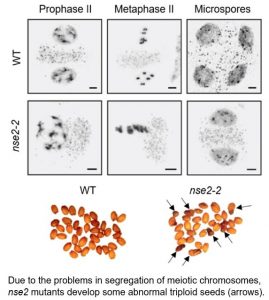 Findings: We discovered that SMC5/6 complex mutants produce about 10% offspring with one maternal and two paternal genome copies. Such triploid plants have an unstable genomic constitution. By looking at different reproductive stages, we determined that a specific defect occurs during meiosis in the mutant, when the chromosomes do not divide to the poles. As a consequence, the meiocyte does not reduce its chromosome numbers. Surprisingly, this defect can happen during each of the two meiotic divisions, and aberrant microtubule organization and delayed division may be responsible. Pollination with diploid pollen, originating from unreduced meiocytes, gives rise to triploid embryo and tetraploid endosperm. The extra copy of the paternal genome in the endosperm causes problems with seed development and is responsible for frequent seed abortion.

Next steps: Understanding plant reproductive development is key to unlocking many biotechnological and breeding applications. At this point, chromosome non-reduction in Arabidopsis SMC5/6 complex mutants is still not fully understood at the molecular level. Therefore, further experiments and constructing various higher-order mutants are needed to reveal the underlying mechanism. In the future, controlled ploidy changes or producing offspring with different chromosome numbers may prove valuable to further our understanding of meiosis and endosperm development. 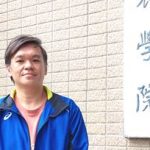